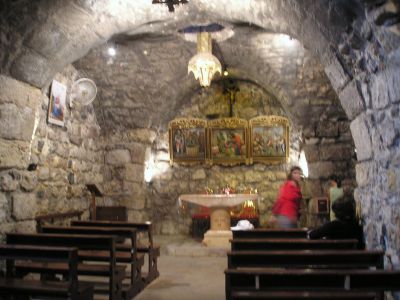 Chapel of Ananias, Damascus (must see)

The Chapel of Saint Ananias is the ancient house of Saint Ananias, in the old Christian quarter of Damascus. It is believed to be the house where Ananias baptized Saul (who became Paul the Apostle). Located near Bab Sharqi (Eastern Gate), five meters below ground, the church was supposedly the cellar of the House of Ananias, but more likely it was built at the level of the Roman street. The church, which has been restored many times, is the only church from the first century to survive in the city. A simple structure consisting of two small rooms with bare stone walls, it houses an altar, some icons and a few pews. The icons tell the story of Paul’s conversion. It represents the simplicity of the early Christians and services are still held to this day.
Image by Heretiq on Wikimedia under Creative Commons License.
Sight description based on wikipedia