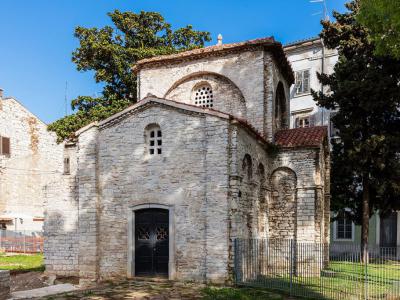 Saint Mary Formose, a basilica, dates from the 6th century. While it is an early Christian monument, only the south chapel, shaped like a Greek cross, remains today. The chapel is an important example of Byzantine architecture in Istria. It was ordered by Archbishop Maximianus of Ravenna.

The original basilica had three naves divided by columns. This effect was echoed in the exterior perimeter walls, windows and blind arches. The sanctuary had three polygonal arches and two side chapels. Of these, only the south chapel is fully preserved today. Most of the north chapel has been absorbed into residences close by.

The exterior is plain, with shallow pilasters, blind arches and half-circle windows. In 1605, when the Venetians raided Pula, they carried off many precious items, including alabaster pilasters which now stand behind the high altar of Saint Mark's Basilica in Venice.
Image Courtesy of Wikimedia and Diego Delso.