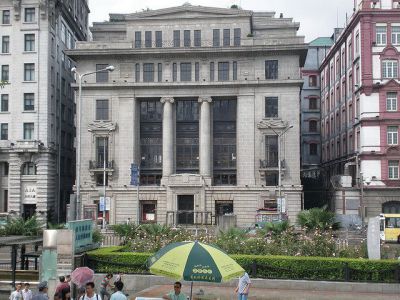 The Building was built for the offices of the British Chartered Bank at No:18, the Bund in Shanghai. It was the earliest foreign bank in China.

The site of the Chartered Bank Building was purchased from another bank called the Oriental Bank in 1893. The structure was designed by Tug Wilson in a neo Greek style. The steel framed building rests on two rafts, one for the main structure and another for one at the back used for the treasuries. The lion’s heads on the bronze lamps were the symbols of the British trade dominance in the area. The interiors were clad with Italian marble. The entire floor, walls and ceiling were shipped from England and erected on the site. The building was inaugurated by Sidney Barton, the British Consul and thrown open for business in 1923.

After 80 years of neglect, the building was taken over by Taiwanese developers who restored the entire structure to its former glory. The restoration was overseen by Venetian designer Pilippo Gabbiani who added modern facilities in harmony with the original fittings in the building. Today, the Chartered Bank building houses high end boutiques, branches of well known brands and a space where creative exhibitions are held.
Image by wendra t on Flickr under Creative Commons License.