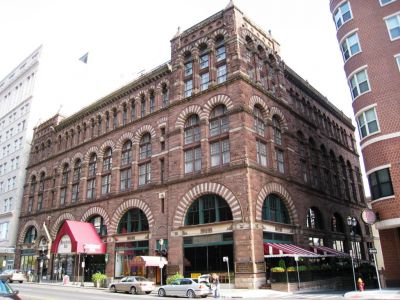 The R. and F. Cheney Building, also known as the Brown Thomson Building, is a commercial building designed by noted American architect H. H. Richardson. It is located on Main Street in Hartford, Connecticut, and is now on the National Register of Historic Places.

The Cheney Building was constructed 1875–1876 for the Cheney Brothers silk manufacturers in Manchester, Connecticut. It was originally a multipurpose structure with five small shops on the ground floor, and offices and apartments above. For many years it housed Brown Thomson's department store, and later the G. Fox and Company.

The building dominates its corner location with its facade organized into three heavy, horizontal tiers of roughly cut, reddish brownstone punctuated with much lighter Berea limestone trim. The lowest tier is defined by a series of huge round arches in striking polychrome bands, a motif repeated in the stories above at an increasingly smaller scale. The ground-floor tier on the Main Street facade features five broad arches above shop windows and doors. The second floor tier features two-story arcade of 10 major openings, while the third floor tier features single-story arcade of 14 openings.

The building is crowned with low, asymmetric towers at its Main Street corners. As of 2007, it has been renamed as the Richardson Building, and now hosts a Residence Inn by Marriott, and several offices, stores, and restaurants.
Image by Daderot on Wikimedia under Creative Commons License.
Sight description based on wikipedia