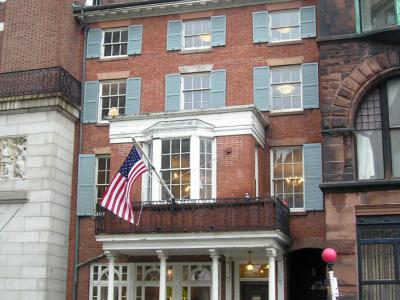 The Chester Harding House is a historic building located across from the Massachusetts State House on Beacon Hill. The four-story town house was built in the Federal architectural style as a private home by real estate developer Thomas Fletcher in 1808, at a time when Park Street and Beacon Street were lined by run-down public buildings.

As evident from a commemorative plaque hanging on the left-hand side of the building, it was declared a U.S. National Historic Landmark in 1965 for its association with the famous American portrait painter, Chester Harding. In 1826, Harding bought the house and occupied it until 1830.

In January, 1962, the Boston Bar Association acquired the property and moved its headquarters here from 35 Court Street, where it still remains at present.
Image by Adam Lenhardt on Wikimedia under Creative Commons License.
Sight description based on wikipedia