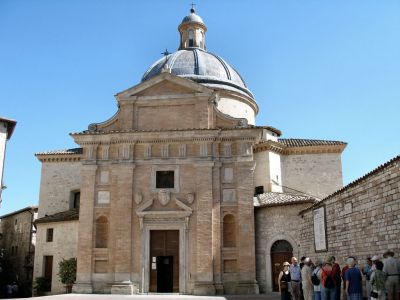 New Church was built in 1615 over the ruins of the birthplace of Saint Francis, the house of Pietro di Bernadone. The church was called New Church because it was the newest church at that time in Assisi. In 1613 Antonio de Trejo, Spanish Vicar General of the Franciscans, saw the home of the Saint in ruins and raised funds to buy it.

Pope Paul V blessed the cornerstone brought in a procession from San Rufino Cathedral to the construction site. The church is built in a late Renaissance style. It has a high dome with coffers. The basic plan is Greek Cross, with a nave and transepts of equal length. The inside is has frescoes by Cesare Sermei and Giacomo Georgetti.

The facade is of brick. It has four columns supporting a Doric entablature with an attic gable. The frescoes cover the walls date back to 1621. The stucco decorations date to 1769. There are depicted eight episodes in the life of Saint Francis.

To one side is the cell where Pietro di Bernadone kept Francis in chains to dissuade him from the life of a mendicant. Inside the cell is a wooden statue of the saint in prayer.
Image by Gunnar Bach Pedersen on Wikimedia under Creative Commons License.