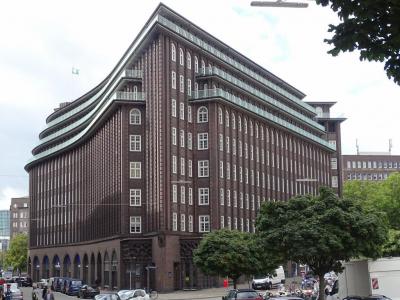 The Chilehaus is a ten-storey office building in Hamburg, Germany, a prime example of brick architecture of the 1920s. This building is located on a site of approximately 6,000m² spanning the Fischertwiete street. It is famed for its top, which is reminiscent of a ship's prow, and the facades, which meet at a very sharp angle at the corner of the Pumpen and Niedernstrasse.

Because of the accentuated vertical elements and the recessed upper storeys, as well as the curved facade on the Pumpen street, the building has a touch of lightness, despite its enormous size. The building was designed by the architect Fritz Höger and built between 1922 and 1924. It was commissioned by the shipping magnate Henry B. Sloman, who made his fortune trading saltpeter from Chile, hence the name Chile House. The building was built using 4.8 million dark Oldenburg bricks.
Image Courtesy of Flickr and peterolthof.
Sight description based on Wikipedia.