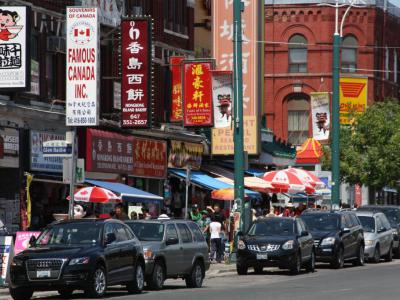 Toronto's Chinatown, also known as Downtown Chinatown or West Chinatown, is an ethnic Chinese enclave located in the city's downtown core, centered at the intersections of Spadina Avenue and Dundas Street, West. In fact, this is one of Toronto's many Chinatowns, and was formed in the 1950s-1960s in a formerly Jewish district.

Downtown Chinatown is one of the largest in North America. Historically, it has been represented by immigrants from southern China and Hong Kong. Since the transfer of Hong Kong's sovereignty to the People's Republic of China in 1997, immigrants from mainland China have greatly exceeded those from Hong Kong. Starting the 1990s, the area has been redefining itself in the face of changing demographics and gentrification prompted, among other factors, by the increased interest from urban professionals and young people who work in the Financial District.

While the majority of the grocery stores and shops remain, most of the once-famed restaurants on Dundas Street West, especially the barbecue shops located below grade, have closed since 2000. With the population changes of recent decades, the area has come to reflect a diverse set of East Asian cultures through its shops and restaurants, including Chinese, Vietnamese, Thai and Japanese eateries ranging from dim sum and pho to modern fusion. The major Chinese malls in the area are Dragon City and Chinatown Centre.

The El Mocambo live music venue, a 1940s establishment that had been in place even before the neighbourhood became Chinatown, is still operational. Also “evergreen” proved the animated Asian open-air markets and shops along Spadina Avenue that offer fresh fruits and vegetables, along with herbal medicine and souvenirs. Chinese New Year celebrations are yet another local attraction, drawing tourists and locals to live stage shows, martial arts demonstrations and lion dances.

Why You Should Visit:
One of the most popular districts for shopping, walking and enjoying Chinese food and culture in Toronto.
The information overload of all the Chinese signs makes this an interesting neighborhood to take a stroll.
You'll find lots of inexpensive eateries here, especially late at night; also a great place to pick up gifts for home, as it is cheaper compared to the shops in the city centre. The local shops offer all kinds of merchandise.
Image by Danielle Scott on Wikimedia under Creative Commons License.
Sight description based on wikipedia