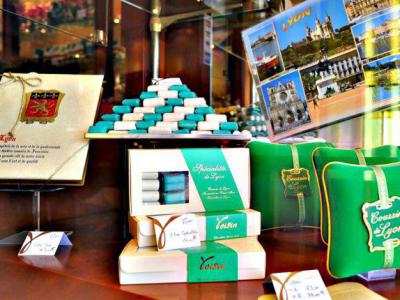 A brainchild of Léon Voisin, this family-run chocolaterie has been in business for more than a century. It was established in 1897 as a specialty boutique selling tropical products (coffees, teas and more) from the French colonies in Africa and Asia.

Nowadays recognized as the largest independent artisanal chocolate maker in France, Voisin is particularly famous for its Coussin de Lyon (“Lyon Cushion”). This traditional local sweet, composed of a creamy chocolate ganache delicately set with a thin layer of marzipan, is classified as the National Confectionery Heritage. Its shape was inspired by a historic event that took place during the plague epidemic in 1643. In a bid to save the city, Lyon's council members offered prayer to Virgin Mary along with a seven-pound candle and a golden shield placed on a silk cushion. The city was spared and today the emerald "cushion of Lyon" marks remembrance of that event.

Other than this, the Voisin range includes over 60 fine chocolates in a mouth-watering array of flavors, not to mention a variety coffees and teas. They also produce candied fruits and sugared almond candies, known as dragées, in a rainbow of colors that are traditionally offered to guests at weddings and other important ceremonies.

Present in practically all the major cities of France, Voisin has a main boutique on the northern side of the largest pedestrian square in Europe, Place Bellecour in Lyon.
Image by GPSmyCity under Creative Commons License.