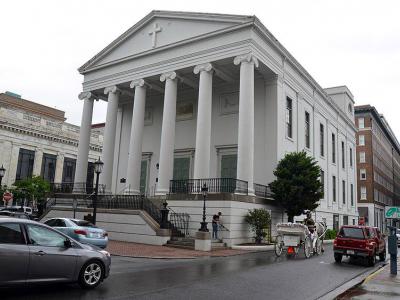 Christ Church is one of Savannah's oldest churches. This Anglican Church calls itself the Mother Church of Georgia and has been in existence since 1733. It was founded with the creation of Georgia as a colony, and its location was spelled out by General James Oglethorpe in his plan for Savannah. Originally, services took place in the settlement's courthouse.

One of the church's rectors, John Wesley, served for a year between 1736 and 1737. Though he wasn't with the church long, he published a Collection of Psalms and Hymns, which was America's first English hymnal. He was succeeded by George Whitefield, who was instrumental in raising money for the colony's orphanage.

The church's interior is not the original. In 1895, a fire nearly gutted the church. Subsequent renovations gave the church the appearance it has today, including the Ascension windows, which serves as a memorial to the Right Reverend Stephen Elliott, first bishop of Georgia and first and only Presiding Bishop of the Protestant Episcopal Church in the Confederate States of America during the southern secession of the Civil War.

Today, the church serves as a historical site and religious institution. Services are still given on Sundays, including an Evening Eucharist (6pm).
Image by Roman Eugeniusz on Wikimedia under Creative Commons License.