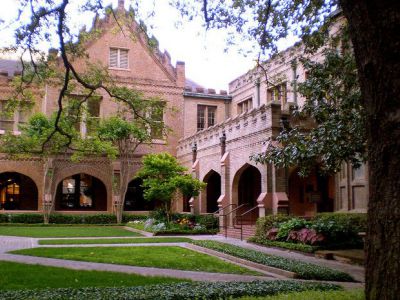 Christ Church Cathedral is the oldest worshiping congregation in Houston, and also one of the most interesting. This facility has been around since 1839, when Texas was not part of the United States, and Houston was its capital city. Members of the church – about 28 families – were among some of the first families to colonize the area.

The congregation retained its original site, which is quite significant when taking into account that the structure suffered a major fire in 1938. Largely due to the heroic efforts of an intrepid Roman Catholic firefighter who sprayed down the ornately carved rood screen to prevent the fire from spreading, the church survived with only minor damage. Later, a businessman offered to buy the church property for a hefty amount, but members voted down both the initial offer and a second bid.

The building was designed in a late Gothic Revival style, which again makes it quite unique, along with the altar inside which happens to be graced with a chalice bearing the gemstones from repurposed rings. Added to the National Register of Historic Places in the year 1979, the church is mostly known to its neighbors for the bells that toll every hour on the hour, "a sign that God is present in the heart of the city."
Image by Virgil C. Robinson on Flickr under Creative Commons License.