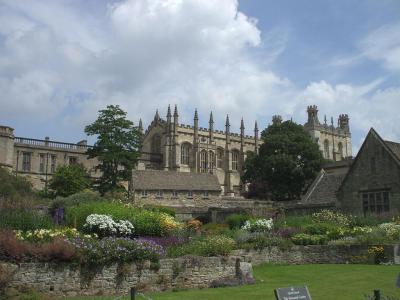 Christ Church holds a rather unique position of being both a college chapel and the cathedral of the Diocese of Oxford. Until the 20th century it was also the smallest cathedral in the United Kingdom.

Its history predates the Norman Conquest, when a shrine was built on the site in memory of St Frideswide, a much-persecuted 7th century priestess, who seemed to have spent most of her life guarding her chastity from the amorous attentions of King Algar, one of the kings of the Seven Kingdoms of Saxony.

By 1122, the cathedral had been part of the St Frideswide Priory, but in 1520 the buildings and lands were confiscated by Cardinal Wolsey who wanted them to build Cardinal College. Five of the bays in the western part of the nave were demolished to build what is now Tom Quad, before Wolsey, in his turn, was ousted by King Henry VIII, who had Christ Church College built on the foundations.

The rest of the cathedral was built in the Perpendicular, or English Gothic style, with the five bays of the eastern part of the nave, the choir and the tower keeping the original Norman appearance.

The wonderful rose window, in the Botanical style, features ten petals around the central glass. Other windows of note are the Becket Window, dating back to 1320, which survived the Reformation, and the Jonah Window, depicting the City of Nineveh, created in 1632.

The shrine of St Frideswide has been restored and stands before a beautiful stained glass window with 16 panels that tell the story of her life. If you look closely at the 16th panel, you will see a water-closet, which certainly didn’t exist in the 8th century and is a give-away to the window’s Victorian creation.

The Cathedral Shop, where you can buy souvenirs, books and CDs among other gift items, is housed in the 12th century Chapter House. While browsing the shelves, take a look at the vaulted ceiling where you will see 13th century medallions depicting the Saints.
Image by Ozeye on Wikimedia under Creative Commons License.
Sight description based on wikipedia