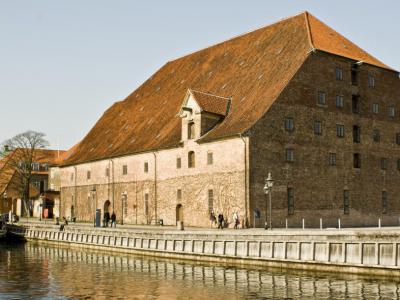 With its general reddish appearance and its location by the waterfront, this attractive building, dating from 1608, acted as a brewery before being turned into a museum. Even before that, it served military purposes as a corner bastion – part of King Christian IV's fortification of the city – until much larger fortifications were built in nearby Christianshavn.

Mostly open to the public in the summertime, the remarkable museum on site contains a great collection of large, but now fragile, sculptures that once graced Danish palaces and royal grounds (thus the name – Lapidarium of Kings). The downstairs portion has hundreds of these packed together in tight quarters, almost as if you're entering a historic function hall for a sold-out evening gala only to realize that everyone present is really an inanimate sculpture! You will marvel at the workmanship and sheer grandeur of historic figures, Greek and Roman gods and goddesses, everyday people, and mounted horsemen. All in all, a very interesting place, especially for those whose knowledge of sculptures is scarce.
Image by JEK on Wikimedia under Creative Commons License.