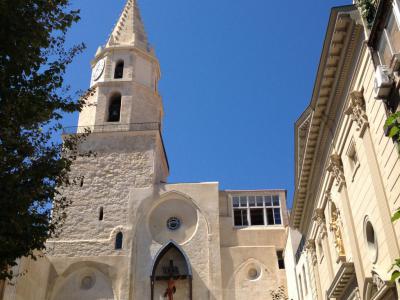 The Notre-Dame-des-Accoules church is part of a set including a bell tower, classified as a historic monument by decree of July 7 , 1964, the only vestige of the medieval church razed from 1794, a Calvary erected in 1820, and a new church built in 1824-1826.

According to tradition this church was built on the ruins of the temple of Minerva 2 . In 1033, the nuns of the Abbey of Saint-Sauveur in Marseille, received in the enclosure of Notre-Dame-des-Accoules, were its rectresses. In 1060, the mention Sancta Maria ad Acuas associated it with the property of the monastery which was then attached to the Abbey of Saint-Victor . The church was rebuilt in 1205, known by an inscription on a column that has been preserved.

In 1793 the church of Accoules hosted the assemblies of a municipal section engaged in the federalist insurrection against the Convention . After the defeat of the federalists , the representatives of the people on a mission in the Bouches-du-Rhône department ordered the buildings which had served them as “haunts” to be razed.

Of this important Gothic building only the bell tower is preserved, spared because its clock gives the time for all the work of the port and the city 6 , as well as the back wall which has preserved the ogival traces of the three naves of the building.

In 1820 a crypt depicting the Holy Sepulcher surmounted by a rock calvary was built against the back wall of the old church. In front, the Place du Calvaire is leveled and closed by a gate.
Image Courtesy of Wikimedia and mikaelyves.
Sight description based on Wikipedia.