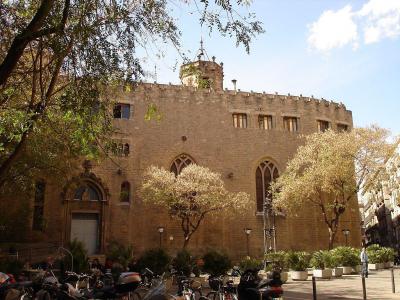 Set on the side of the quaint Sant Pere Square in the Ribera district, the eponymous Sant Pere de les Puelles church is not very well known outside Barcelona, whereas it is one of the oldest churches in the city with a great deal of history behind. As a matter of fact, it marks the site where the ancient settlement of Barcelona stems from. In the year 985 AD, the invading Muslims attacked and largely destroyed the Sant Pere convent, killing or capturing all its resident nuns.

Although in the course of centuries the church was subsequently rebuilt, certain parts of the original structure, such as the pre-Romanesque Greek-cross floor, the Corinthian columns beneath the 12th-century dome, and the Renaissance vault leading to a side chapel, have remained. Despite its medieval appearance, the high-walled facade of the church is a rather recent, 20th-century remake. One of the original bell towers still in place looks pretty awesome from a photography standpoint. With some luck, you may climb to the top of it for a bird's eye view of the surrounding area.
Image Courtesy of Wikimedia and Oh-Barcelona.com.