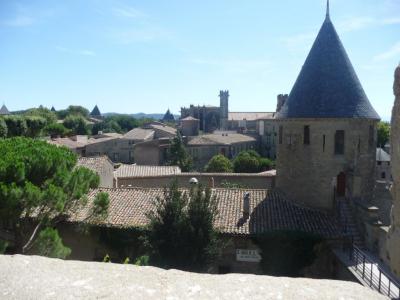 For almost all of its history, the fortified City of Carcassonne has been defended by its walls. The Cite itself goes back more than 2,000 years. It was an oppidum, a Celtic iron age strong point. In the 1st century BCE the Romans transformed it into a town. The Romans were followed by Visigoths, Omayyads and eventually, Crusaders.

In 1208 Pope Innocent III declared a crusade against the Albegensian Heresy. This was bad news for Cathar Raimond-Roger, Viscount of Trencavel and ruler of Carcassonne. The Cathars were evicted and Raimond died in his own donjon. In 1247 Louis VIII declared the Cite to be royal after the usual terror, massacres and yes, the Inquisition.

The Roman walls were gradually replaced by the 14th century. New walls were reinforced and lengthened and new towers built. In 1459 however, The treaty of the Pyrenees was signed with Spain. Carcassonne ceased to be an important military outpost and the fortifications fell into disrepair.

In 1849 the Government in Paris tried to demolish the fortifications in a deluded effort at urban renewal. This proved unpopular. After a public outrage the government reversed itself and restoration of the Cite began in 1853.

Cue in M. Eugene Viollet-le-Duc, architect extraordinary in France in the 19th century. Le-Duc was charged with restoring the fortifications of Carcassonne. He came with an impressive resume. The Notre-Dame de Paris Cathedral, Basilica of St. Francis, and Mont St Michel were all restored by his efforts.

Le-Duc was criticized for mixing northern and southern Gothic styles in his Gothic restorations. He used Blue tiles common in Flanders for the roofs of the towers of Carcassonne. His roofs were also pointed. The southern style used terra-cotta tiles and sloped roofs in the Roman fashion. In any case his walls and towers are more dramatic.

According to the legend, in the 8th century a Muslim princess of Carcassonne deceived Charlemagns into abandoning his siege of the city. As they marched away, she ordered all the bells to be rung. On hearing the bells the soldiers said, "Carcas sonne!" meaning "Carcas is ringing". Hence the name of the city.

Why you should visit
Although Carcassonne has grown somewhat touristy in recent years, the old city remains the same. The restorations have made the fortifications and towers overwhelming. Something like Disneyland but Carcassonne is the real thing. And then there is the irreplaceable Jean Deschamps Theatre.
Image Courtesy of Wikimedia and Marcok.