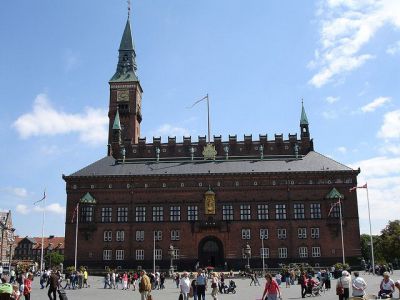 Inspired by the Siena City Hall in Italy, yet draped, inside and out, in Danish symbolism, this building and its huge tower were constructed in National Romantic style by famous architect Martin Nyrop in 1905. On approaching, you will be impressed with its front decorated in rich ornamental style, where polar bears symbolize the giant Danish protectorate of Greenland. Standing just over the door is the gilded statue of the city's founder, Bishop Absalon, who drove out pirates and built a fort to guard the harbor, turning a wretched fishing village into a humming seaport some nine centuries ago.

Enormous functions fill the interior's grand hall (freely open to the public), while the marble busts of four celebrated local boys – fairy-tale writer Hans Christian Andersen, sculptor Bertel Thorvaldsen, physicist Niels Bohr, and the building's architect, Martin Nyrop – look on. Downstairs are national archives dating back to the 1270s, popular with those researching their family roots. As you leave, pop into the amazing World Clock (opposite the info desk), built between 1943-55 – the mother of all astronomical clocks in function and precision. Its displays include lunar and solar eclipses, positions of the stellar bodies, and a perpetual calendar, in addition to the time across the world's time zones. The clock's fastest gear completes a revolution every ten seconds and the slowest – every 25,753 years!

Tip:
Free to see the main hall, which is stunning but there's a small fee to go up the tower.
They escort you in groups and the times are 11am / 12:30pm / 2pm; Saturdays at 12pm.
As the building is central, the views are great and the viewing platform is square and large.
Alternately, you are free to join a guided tour in English at 1pm (weekdays) and at 10am (Saturday).