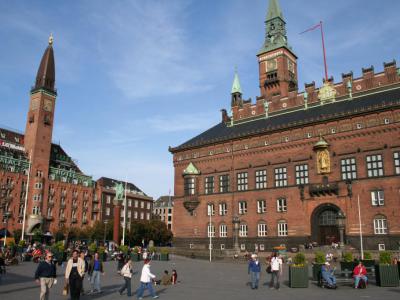 Sitting in the shadows of the stately and historic City Hall, Radhuspladsen is a main hub of the many miles of Copenhagen's beautifully historic pedestrian streets, as well as a gathering place for, street performers, public message boards, and folks from all corners of the globe. As in so much of this magical city, English is not only understood widely, but spoken better than what one would hear in the public plazas of most major American cities.

Once Copenhagen's fortified west end, it contained much of the city within its walls, with as much as 150,000 people packed inside by the mid-19th-century. The overcrowding led to hygiene problems (including a cholera outbreak), so after nearly seven centuries the walls eventually had to come down. Today, the redesigned square features the Dragon Fountain (1904) depicting a bull and a dragon in combat, and the impressive Weather Girl (Danish: vejrpigen) that tells when the rain comes. There is also a statue of Hans Christian Andersen, one of the most popular Danish writers in history, and a bronze depicting two lur blowers mounted on top of a tall terracotta column – the latter having been a gift to the city from the Carlsberg Foundation on the occasion of the centenary of the birth of Carlsberg founder J. C. Jacobsen.

Just across the street is the very interesting Dansk Industri building that contains a showroom for green technologies (House of Green), as well as a series of two-storey flagship stores and restaurants on Vesterbrogade. Down the same street towers the Radisson Blu Royal Hotel, Copenhagen's only skyscraper, built in 1960 as the world's first design hotel.
Image by Karri Huhtanen on Wikimedia under Creative Commons License.