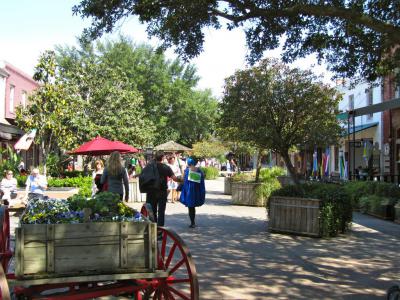 Originally centered on the site of today's Ellis Square, from 1733, Savannah's main marketplace was established as a wooden building where locals gathered for their groceries and services. By 1755, the market had turned into a center of local commerce and hub of all activity downtown; a place where fishermen and farmers would bring their goods to sell.

Over time, the building survived two fires (in 1796 and 1820) which ultimately destroyed it, and was replaced the following year with a single-storey structure. The latter was torn down also, shortly after the Civil War, and its place was taken by a brick building, erected in 1876, by architects Augustus Schwaab and Martin Phillip Muller.

Albeit praised as "roomy (the structure encompassed 33,000 square feet), and capable of being kept in the highest condition of cleanliness, with ample ventilation", the cost of construction "vastly exceeded expectations". Later excavations revealed weakened arches in the basement floor that required them to be replaced.

The market suffered severe damage from a hurricane in 1896, and was even closed at one point, in 1954. But today it thrives once again, stretching for a good two blocks between Ellis and Franklin squares.

The old 19th-century cotton warehouses, once fallen into disrepair, have been restored and renovated, and turned into bistros, art galleries, casual and upscale restaurants, antique stores, jewelry shops, bakeries, sweets and candy parlors, and other specialty outlets (there's even a daiquiri dispensary and a specialty coffee joint).

The newest attraction in the market complex is the American Prohibition Museum, which has 6,000 square feet of exhibition space, housing 13 galleries.

During the day and at night the historic place offers totally different experiences. In the evenings, visitors can enjoy jazz at local nightclubs or otherwise discover the "art and soul" of Savannah while being serenaded by local musicians.
Image Courtesy of Flickr and Jon Dawson.