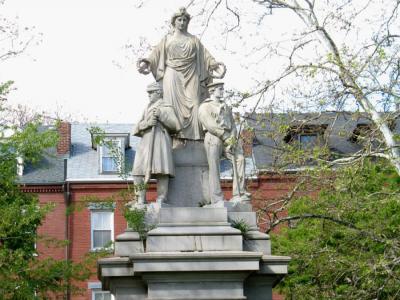 The Charlestown Civil War Memorial is an outdoor monument to the soldiers and navigators native of Charlestown, Boston, who fought for the Union during the American Civil War. It was designed by Martin Milmore in 1871 and dedicated in 1872 in Boston's Winthrop Square also known as the Charlestown training field, where the Minutemen trained during the American Revolution. Today the square is surrounded by a beautiful park which you can't miss en route to/from Bunker Hill on the Freedom Trail.

The memorial is quite massive: statues measuring approximately 12x9x8 feet, and a pedestal – about 18x13x13 feet. It is made of granite and depicts three figures: an allegorical statue of Liberty in the center with a laurel wreath in each hand, and two figures of a soldier and a sailor in front of her. Surrounded by trees and a fence, the memorial can be viewed only from a distance.
Image by Jamie on Flickr under Creative Commons License.
Sight description based on wikipedia