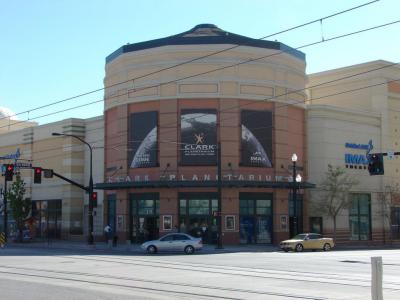 The Clark Planetarium is situated within the Gateway District and was opened in April 2003, replacing the historic Hansen Planetarium. This theater is the first "pitless" digital dome planetarium in the USA.The theater seats 205 and features individual interactive seat button controls. Designed around Evans & Sutherland's Digistar 3 planetarium system, six high resolution projectors mounted behind the dome at the cove line work together, each "blending" its edges to form a single seamless video stream over the entire dome. What results is an entirely new way to experience the universe, in 3 dimensions with a resolution far beyond high definition video. In late 2011, the system was updated to a Digistar 4. A specially tuned 13,000 watt sound system with 5.1 surround sound and 21 speakers is installed behind the screen. Clark Planetarium Productions is one of the few informal science education institutions with the resources to create and distribute its own fulldome animation content.

The Clark Planetarium features 10,000 square feet (930 m2) of free exhibits including the newly installed "Science on a Sphere," a computer animation globe by NOAA. Also unique is "Newton’s Daydream," the most ambitious audio-kinetic sculpture ever created by artist George Rhoads. Other popular exhibits include a Foucault pendulum, Earth Globe, Meteorites, Telescope displays, and updating video from the Hubble Space Telescope and NASA TV. The Clark Planetarium is also one of the few institutions to have an authentic moon rock sample on permanent loan from NASA. This rock was obtained from the Apollo 15 mission and is displayed in a special exhibit showing the Apollo moon landings.