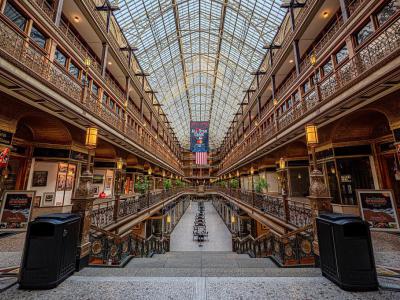 The Arcade in downtown Cleveland is a Victorian-era structure of two nine-story buildings, joined by a five-story arcade with a glass skylight spanning over 300 feet (91 m), along the four balconies. Erected in 1890, it is identified as one of the earliest indoor shopping malls in the United States.

The Arcade is a cross between a lighted court and a commercial shopping street. The building is a complex of three structures: two nine-story office buildings facing out to Euclid and Superior Avenues, connected via the five-story iron-and-glass enclosed arcade. The Richardsonian arched entrance along Superior Avenue is original, but the Euclid Avenue front was remodeled in 1939. The arcade itself is a 300-foot (91 m)-long covered light court, ringed by four levels of balconies, which step back above the Euclid Avenue level. The vertical lines of the columns, rising nearly 100 feet (33 m) to the glass roof, create a spacious domed interior.