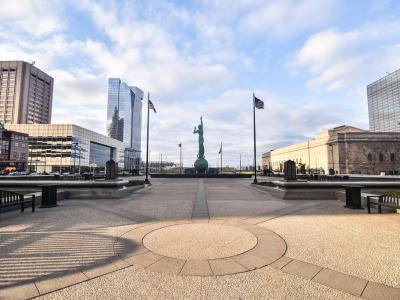 The Cleveland Mall is a long public park in downtown Cleveland. It was conceived as part of the 1903 Group Plan by Daniel Burnham, John Carrère, and Arnold Brunner as a vast public space flanked by the city's major civic and governmental buildings, all built in the neoclassical style. In the spirit of the City Beautiful movement, formerly seedy areas were transformed into a "magnificent civic center", which was supposed to be crowned by the Union Terminal at the north end of the mall, on the shores of Lake Erie. The Mall was added to the National Register of Historic Places in 1975, and the Cleveland Restoration Society is pursuing a National Historic Landmark designation.

The Mall is divided into three sections, known as Malls A, B, and C. Mall A, the southernmost, is officially named Veterans' Memorial Plaza, and Mall C was dedicated as Strawbridge Plaza in 2003. The Memorial Plaza, which borders St. Clair Avenue, is the site of the Fountain of Eternal Life, also known as the War Memorial Fountain. The Cleveland Convention Center is underneath Malls B and C, and plans to extend the center north are under consideration as part of the Cleveland City Planning Commission's efforts to renovate or replace the existing facility. In January 2009, part of the mall was proposed to be the site of a medical mart.