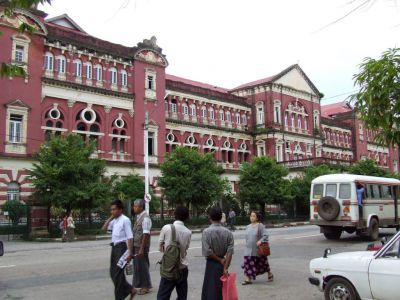 The British seized Yangon and all of Lower Burma in the Second Anglo-Burmese War of 1852, and subsequently transformed Yangon into the commercial and political hub of British Burma. Based on the design by army engineer Lt. Alexander Fraser, the British constructed a new city on a grid plan on delta land. The British also established hospitals including Yangon General Hospital and colleges including Yangon University.

Colonial Yangon, with its spacious parks and lakes and mix of modern buildings and traditional wooden architecture, was known as "the garden city of the East." By the early 20th century, Yangon had public services and infrastructure on par with London. The Colonial buildings were used as colonial government in fighting against oppressed in Burma.
Image Courtesy of Wikimedia and Thomas Khaipi.
Sight description based on Wikipedia.

Want to visit this sight? Check out these Self-Guided Walking Tours in Yangon. Alternatively, you can download the mobile app "GPSmyCity: Walks in 1K+ Cities" from iTunes App Store or Google Play. The app turns your mobile device to a personal tour guide and it works offline, so no data plan is needed when traveling abroad.