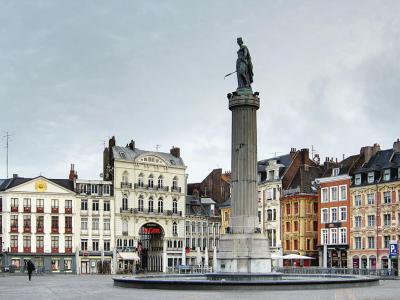 Column of the Goddess, Lille

Column of the Goddess is the popular name given by the citizens of Lille to the Memorial of the Siege of 1792. The memorial sits in the center of the city's main square. The siege of September 1792 was a battle fought during the French Revolutionary War and is considered a major event in the city's history, despite its relatively low military significance on a wider scale. Hyacinthe Jadin composed Marche du Siège de Lille in 1792. Fifty years later, the local authorities decided on the building of a memorial, and began in September 1842. The memorial consists of a column topped by a statue. The column was designed by architect, Charles Benvignat, while the statue was sculpted by Théophile Bra as an allegory of the besieged city wearing a mural crown.
Image by Tom Page on Flickr under Creative Commons License.
Sight description based on wikipedia