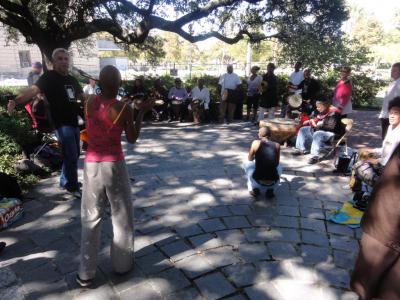 Visitors to New Orleans can experience a bit of African Culture whenever they visit Congo Square located in Louis Armstrong Park in the Treme neighborhood. Back in the day, this square served as a gathering spot for African slaves on their free day of Sunday. In 1817 the mayor of New Orleans designated an open area within the city to be used by slaves as a meeting place.

Originally named Place de Negres, then Place Publique, and then Circus Square, the plaza enabled slaves to honor their culture through song and dance. They could also sell their wares at the local market. The colonial French slavery style allowed slaves much more freedom than the rest of the United States. Slaves could move freely within the square.

As the United States slavery style became more prevalent, the gatherings occurred less and less and finally ceased completely about 10 years before the end of slavery. After the abolition of slavery in the late 19th century, Congo Square once again came to life when Creoles of Color began to play their music here, thus giving birth to the new music genre later known as Jazz.

Outside music and dance, Congo Square also provided enslaved blacks with a place in which they could express themselves spiritually. The brief freedom of conscience that they enjoyed on Sundays resulted in the practice of Voodoo ceremonies. Although this was not the most noted recreational activity people partook in here, it was nonetheless one of the many forms of entertainment and social gatherings they practiced.

Marie Laveau, the first and most powerful “Voodoo queen” of New Orleans, is one of the best known practitioners of Voodoo in Congo Square. In the 1830s, she led Voodoo dances as well as organized darker, more covert rituals along the banks of Lake Pontchartrain and St. John's Bayou.
Image Courtesy of Wikimedia and Bart Everson.
Sight description based on Wikipedia.