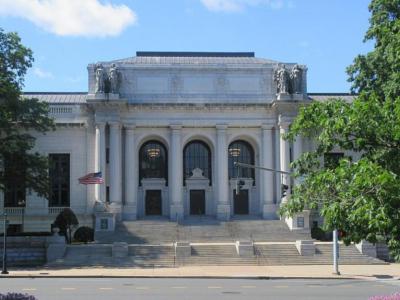 Connecticut’s State Library and Supreme Court Building includes the Library, State Archives, and Museum of Connecticut History. The groundbreaking ceremony for the Connecticut State Library and Supreme Court Building was held on July 29, 1908. Architects Donn Barber of New York and E. T. Hapgood of Hartford envisioned a design based on an adaptation of the Italian Renaissance style of architecture. The design includes three wings off a central lobby, the State Library on the left, Memorial Hall in the center and the Supreme Court on the right. Construction began on October 23, 1908. On November 28, 1910, State Librarian George Godard and his staff moved into the new building.

The library building was listed on the National Register of Historic Places in 1981, recognizing both its architecture and its significance as a repository of state history.
Image by STATELIB on Wikimedia under Creative Commons License.
Sight description based on wikipedia