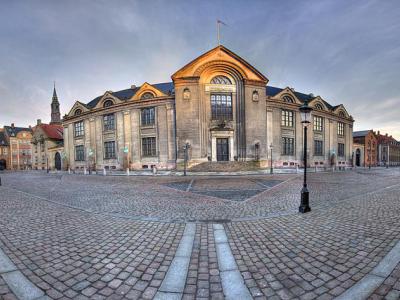 The Latin Quarter is home to Copenhagen's University since the Middle Ages, when Latin used to be the primary language of education. Established in 1479 by a Papal bull, in close location to the Church of Our Lady, it had a predominantly theological focus up until the 18th century when, through various reforms, science and the humanities replaced theology as the main subjects studied and taught. Still, the first female student was enrolled here no sooner than 1877.

A number of prominent scientific theories and schools of thought are namesakes of the institution. The famous Copenhagen Interpretation of quantum mechanics was conceived at the Niels Bohr Institute, which is part of the university. Outside the main building, a busts honor Bohr himself, who won the the 1922 Physics Prize for his model of the structure of the atom and, some twenty years later, helped develop the atomic bomb.

If the doors are open, enter a colorful lobby, starring Athena and Apollo. The frescoes celebrate high thinking, with themes such as wisdom's triumph over barbarism. Notice how harmoniously the architecture, sculpture, and painting all combine.
Image Courtesy of Flickr and Mik Hartwell.