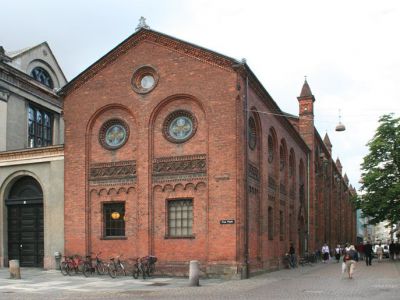 This striking building, completed in 1861, became the most famous work of Johan Daniel Herholdt, a leading proponent of the "national" school in Danish architecture of the period as opposed to the "European" school. Designed as the Copenhagen University Library, it heralded a new trend during the second half of the 19th century, evident in most of Denmark's large-scale cultural and civic buildings, which came to be characterized by the strong use of red brick.

The library's four-centuries-old book collection had been originally housed in the adjacent Trinitatis Kirke, and Herholdt's building, with brick latticework and circular windows, has a church-like quality itself (similarities can be drawn to northern Italian cathedral architecture). The internal structure features the pioneering and elegant use of cast iron, required to prevent future fires. In 2009, the collection was absorbed into the Royal Library and the building became the university's Student Centre. Events are sometimes held here and the building is often included in tours of the city.
Image Courtesy of Wikimedia and Tyke.