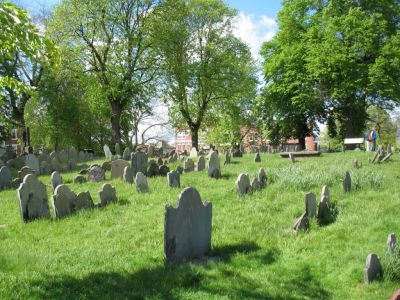 When you follow the Freedom Trail you will see many interesting historical sites and one of them is the Copp’s Hill Burying Ground, which came into use in 1659, making it the second oldest burial ground in Boston. In 1974 it became part of the National Historic Register.

At first it was called Windmill Hill, but was later renamed Copp’s Hill after William Copp who once owned the land. Copp was a shoemaker and the burial ground became the final resting place of craftsmen, artisans and merchants. On the Snowhill Street side of the graveyard are many unmarked graves of African Americans.

It is also the burial site of the famous (or infamous) Salem witch-hunters Cotton and Increase Mather; Edmund Hart, a rich shipyard owner; Prince Hall, ardent abolitionist and founder of the Black Masonic Order; Robert Newman, who placed the signal lanterns on the Old North Church steeple for Paul Revere’s famous midnight ride to Lexington and Concord during the War for Independence. Another tombstone marks the place where George Worthylake, the first keeper of the Boston Lighthouse, is buried.
Image by jbcurio on Flickr under Creative Commons License.
Sight description based on wikipedia