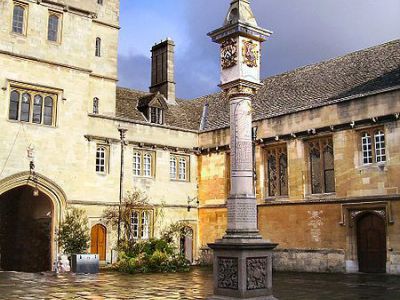 Corpus Christi College on Merton Street is one of Oxford University’s smaller colleges, but it also one of the most renowned. The college was founded by Richard Foxe, the Bishop of Winchester, in 1517. Its library was built at the same time and was the best and most extensive for the epoch, with over 80,000 books in English, Latin, Greek and Hebrew.

Corpus Christi College is, of course, best known for the role its scholars played in the translation of the King James Bible. Commissioned by the Crown, they formed two of the six companies who translated the Scriptures from Hebrew and Greek into English.

At Corpus Christi, theologians were in charge of translating eleven books of the Prophets – from Isaiah to Malachi, and the four Gospels, Acts and Revelation in the New Testament. The project took eleven years and the Bible was finally printed in 1611.

On the Main Quad you will find the tower, the dining hall and the Chapel. The sundial topped by a pelican was placed in the center of the quad in 1581 by Charles Turnbull. The pelican is part of the college’s coat of arms and is said to be an allegory of Christ, in that according to a legend, pelican tears at its own breast to feed its young, while Christ offered up his body to save humanity.

A second quad was built in the 18th century, with the Fellows Building being a fine example of the Neo-classical style. This quad overlooks Christ Church Meadow.
Image by Mike Young on Wikimedia under Creative Commons License.
Sight description based on wikipedia