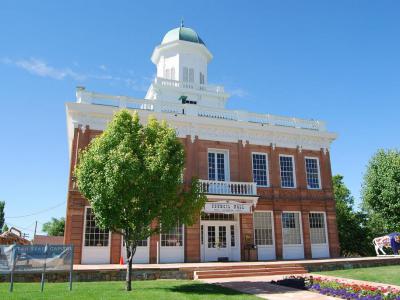 The Salt Lake City Council Hall is currently home to offices of the Utah Office of Tourism and The Utah Film Commission and is located on Capitol Hill. The building is historically important as the Old Salt Lake City Hall or just Old City Hall from 1866 to 1894. Council Hall was originally Salt Lake City Hall, built to replace an older, smaller city hall completed just six years earlier. This small city hall was almost immediately inadequate for the growing city, so planning work on a new City Hall began by 1863.

Ground for the new hall was broken on February 8, 1864 under the direction of the prolific Salt Lake City architect William H. Folsom. Sandstone for the structure was delivered from Red Butte Canyon on Utah's first chartered railroad. In January 1866, City Hall was dedicated by George Q. Cannon, a prominent LDS leader.

Six rooms on the first floor housed the mayor's office and other city departments. From 1866 till 1894, the City Hall was the seat of Salt Lake City Government and meeting place for the Utah Territorial legislature. The Rose Room on the second floor served both as a general courtroom and the legislative floor. After 1894 the city used the Hall as police headquarters until 1915.

To make way for a federal office building downtown, the old City Hall was relocated to Capitol Hill in 1961. Restoration was done under the direction of architect Edward O. Anderson, and was mostly finished by 1962. The building was renamed "Council Hall."