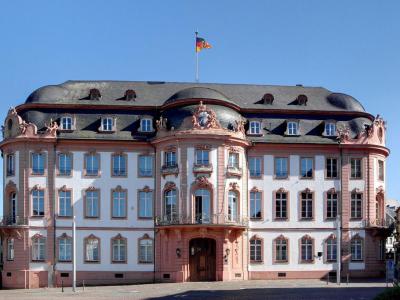 The Osteiner Hof is one of several Baroque-era palatial mansions along Schillerplatz square in the city of Mainz. The mansion, along the southern edge of the square, was built in 1747-1752. Characteristic features for this building are the three round protrusions (risalits) at the front entrance and on the two corners. The building is lavishly decorated; for instance, the windows are framed by rococo-style cartouches symbolising the elements of air, earth and water. The classical gods Diana and Mars are shown on the cartouches framing the balcony doors.

In 1798 mansion became the seat of a newly-created département of France, Mont-Tonnerre. The Osteiner Hof plays an important part in the local carnival traditions. Every year, on 11 November at 11 past 11, the start of the carnival season is proclaimed from the balcony of the mansion.

This sight is featured in a self-guided walking tour of Mainz, Germany within the mobile app "GPSmyCity: Walks in 1K+ Cities" which can be downloaded from iTunes App Store or Google Play. Please download the app to your mobile phone or tablet for travel directions for visiting this sight. The app turns your mobile device to a personal tour guide and it works offline, so no data plan is needed when traveling abroad.

Mainz, one of the oldest German cities, located on the Rhine River, is famous for its distinctive deep red sandstone buildings, such as the Romanesque Mainz Cathedral, Baroque style Augustinerkirche, Mainz Staatstheater and others. Architecture and history buffs will also take interest in the local half-timbered houses and medieval market squares; some buildings spanning back as far as the Roman...  view more

While Mainz is not a very large city, the area is still home to several fantastic museums. Here you may explore Germany's numerous historical, cultural and natural collections - carefully displayed in one of the many museums such as Kupferberg, Fastnachtsmuseum, Museum of Natural History and Landesmuseum.

Mainz offers a unique cultural experience that dates back all the way back to the beginning. Every epoch of Mainz history has thankfully been recorded through impressive art and is preserved today in numerous world famous museums and art centers. Theatre is another phenomenal example of Mainz culture, and evident through the plethora of plays, opera, and ballet.

Mainz boasts a number of churches and parishes which are worth visiting. The city’s oldest churches are especially impressive due to their grand architecture as the exterior and interior of the churches are built in Baroque, Gothic, Rococo, Classical and Renaissance styles. Not only that, but splendid frescoes, old organs, beautiful glass windows and rich high altars only add to the pleasure.

Mainz architecture is very impressive due to its originality and variety of styles. Inside the city, several buildings date back to the 12th century and medieval times. Despite the devastating effects of World War II, these buildings have also survived and are cherished today by many.

Mainz welcomes visitors of all ages. The city is home to several sights, museums, parks, entertainment centers, shops and cafés that are appropriate for both adults and children. Take this family friendly tour to discover rare dolls, classical games, taste typical German handmade pastry, learn history of the city, as well as taste your creativity at Mainz workshops.