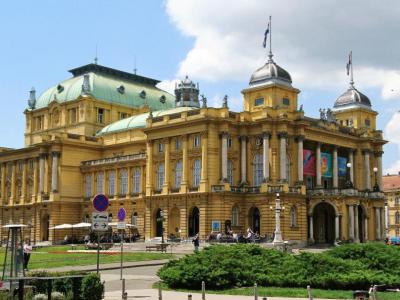 The Croatian National Theater in Zagreb was established in 1840. The theater moved into its current location in 1895; the unveiling ceremony was attended by Austro-Hungarian Emperor Franz Joseph I. The building itself was the project of famed Viennese architects Ferdinand Fellner and Herman Helmer, whose firm had built several theaters in Vienna. Celebrations marking the 100th anniversary of the building were held on October 14, 1995. At the theater's entrance, you can see the famed wall fountain "The Source of Life", designed by Croatian artist and sculptor Ivan Meštrović in 1905

Why You Should Visit: It is a gorgeous building in a park-like setting, surrounded by other beautiful buildings. If you are lucky, you may catch a performance and get a chance to see its equally gorgeous interiors, too.
Image Courtesy of Flickr and Penningtron.
Sight description based on Wikipedia.