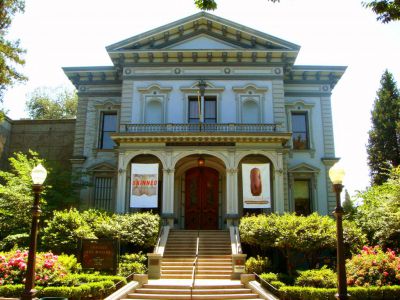 Wealthy lawyer and judge Edwin B. Crocker and his wife Margaret began collecting their extensive collection of drawings and paintings during extended European vacations. When they returned home to Sacramento, they created a gallery that quickly became a hub of social activity in the town. They hosted such notable guests as President Ulysses S. Grant, Oscar Wilde, and Queen Liliuokalani of Hawaii.

When Edwin died in 1875, Margaret donated the collection to the City of Sacramento and the California Museum Association. The art museum became the first one west of the Mississippi. To house their growing collection, the museum began a massive expansion in 2002 with a large, modern addition that opened in 2010.

Their collection spans California history, including many works by local artists. There are also many European originals, including around 1,500 old master drawings and many rare prints that the Crockers collected during their travels. Significant in the collection is one of California's most extensive collections of Renoir's works. There are also many Native American ceramics and all sorts of Asian, African, and Oceanic artwork on display.

The main museum building is housed in the Crocker family mansion. In 1868, Crocker had a local architect redesign an existing home into the Italianate style. Architect Seth Babson also incorporated a gallery building into the structure, including a bowling alley and skating rink. The mansion is considered one of his masterpieces.

The new building expanded the museum's ability to show its collection three-fold. The new expansion has space for an education center and more space to show traveling exhibitions. Approximately 15 percent of the collection is currently shown.

Check the museum's website for current traveling and temporary exhibitions. The biennial Crocker-Kingsley Exhibition is held with the cooperation of the Kingsley Art Club.