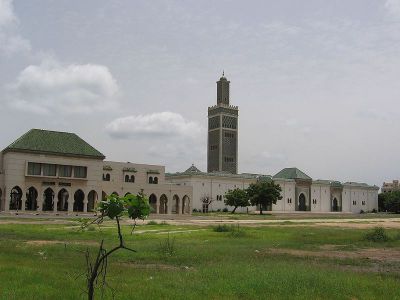 The Dakar Grand Mosque is one of the most important religious buildings in the capital of Senegal. It is situated on Allée Pape Gueye Fall. Designed by French and Moroccan architects, The Grand Mosque was opened in 1964 by Hassan II, King of Morocco and Senegalese President Léopold Sédar Senghor.

Richly decorated on the interior and exterior, it is stylistically similar to the Mosquée Mohammed V in Casablanca. It's minaret rises to 67 meters.

Created in 1964 and situated in the enceinte of the Grand Mosque, the Institut islamique is a public institution under the direction of the Senegalese Minister of Education, dedicated to Islamic research and teaching. The library of the Institute, named for prince Naef Ben Abdelaziz Al-Saoud was opened 9 October 2004.
Image Courtesy of Wikimedia and Ixtla.
Sight description based on Wikipedia.

Want to visit this sight? Check out these Self-Guided Walking Tours in Dakar. Alternatively, you can download the mobile app "GPSmyCity: Walks in 1K+ Cities" from iTunes App Store or Google Play. The app turns your mobile device to a personal tour guide and it works offline, so no data plan is needed when traveling abroad.

Create Your Own Walk in Dakar

Creating your own self-guided walk in Dakar is easy and fun. Choose the city attractions that you want to see and a walk route map will be created just for you. You can even set your hotel as the start point of the walk.

The city of Dakar, capital of Senegal, is a home to many notable sights, most of which are clustered in the Downtown area, including government buildings, art galleries, historic squares and a railway station. On this walking tour you have a chance to explore some of the top attractions of Downtown Dakar.

The city of Dakar, capital of Senegal, is a home to many notable sights, most of which are clustered in the Downtown area, including religious sites, such as the Grand Mosque with its towering minaret; a number of museums, including Dakar's largest Musée Théodore Monod displaying cultural artifacts illustrating diversity of Senegalese traditions and history; and more. On this walking tour...  view more