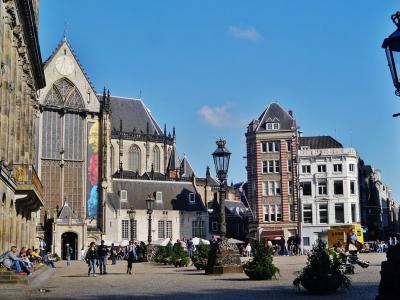 Dam Square lies in the historical center of Amsterdam. The surrounding architecture and frequent public events taking place here make it one of the most important locations in the city. The word “dam” in the name derives from the place's original function – damming the Amstel river. As the matter of fact, it also relates to the name of the city itself – Amstelredamme. Built around 1270, the dam formed the first connection between settlements on the banks of the river.

Gradually, the dam grew wide enough to accommodate a town square, which proved a core of the town's further development. Dam Square, as it's seen today, evolved out of what was originally two squares: the actual dam, called Middeldam; and Plaetse, the adjacent plaza to the west. A large fish market appeared near the spot where ships moored at the dam to upload and download their cargoes. The area eventually became the center of not only the commercial but also the administrative activity (Amsterdam's Town Hall).

Why You Should Visit:
A perfect place to feel the pulse of the city, explore different cuisines, shops, enjoy music or sit by the fountain...
As it is well linked to other parts of the city, you'll have a wealth of choices getting to your next destination after strolling through the square.