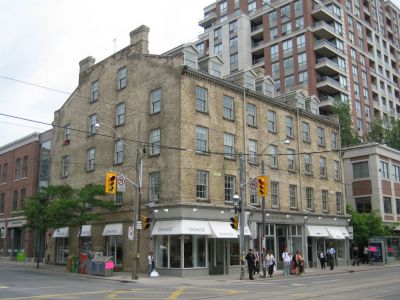 One of the very few structures that escaped the devastating fire of 1849 is the Daniel Brooke Building on Jarvis and King Street. Now standing in all its glory and wisdom, this antique edifice, built in 1833, was originally owned by Daniel Brooke, a wealthy local merchant.

Boasting elegant Georgian style, the architecture is quite a rare sight in the city. Throughout the years, the building has served as home to an array of commercial enterprises. In fact, it was also the place where James Austin and Patrick Foy first opened their grocery store. The former later went on to become one of the most prominent business figures in 19th century Canada. Subsequently, the building saw many prominent personalities and grew quite popular in the local business circuits. However, towards the end of the 19th century, the entire neighborhood surrounding the complex went into a spell of extreme poverty leading to the ultimate abandonment of the building.

Eventually, the government took it up to renovate and revamp the entire neighborhood, as well as to give the Daniel Brook Building the much needed face-lift. After tireless efforts, the area returned to its former glory and today is, once again, one of the trendiest neighborhoods in the city.
Image by SimonP on Wikimedia under Creative Commons License.