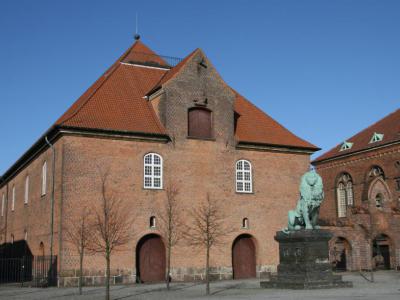 Another one of Danish king, Christian IV's constructions, the old Arsenal – a former storehouse of hand weapons and canons – now houses the Danish War Museum. As such, it is of the very few buildings in Denmark used for the specific purpose it was originally built for, showcasing outstandingly well-preserved old armory alongside more modern exhibits, such as an interesting replica of a NATO station in Afghanistan, set as a full-scale diorama that you can walk through.

The building itself is interesting, commemorating the way in which Renaissance was centralized in Copenhagen, thus extending royal power. The extent of influence held by the armed forces on the capital is evident with the models of the 18th-century citadel and of the king's Arsenal Hall, which, at 156 meters, holds the distinction as the biggest arched Renaissance hall in Europe. There, you will find hundreds of the oldest and more recent Danish canons on display.

In other sections, visitors can go through the sequence of edged weapons and small arms development through the last 500 years. An amazing selection of modern and antique items – including exquisite handguns, war trophy firearms and beautiful princely, ornamental weapons – are on display in the Renaissance Hall. Among other attractions, don't miss the impressive 19th-century collection of military accessories such as banners, uniforms, armor, and saddler.