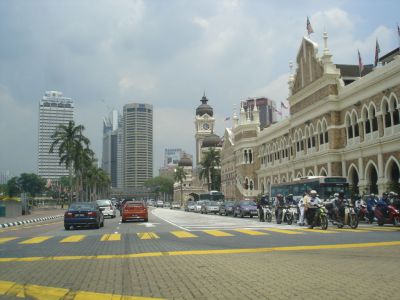 Dataran Merdeka, or Independence Square, is a historic site that has a special place in the heart of every citizen of Malaysia. On your visit to Kuala Lumpur, you are bound to visit the Independence Square for it is surrounded by some historic landmarks and prominent buildings.

Built during the reign of the British Empire, the Independence Square was used as the ground to play one of England’s most beloved games, cricket. Overseeing the square was the Selangor Club which was a British club founded in 1884 as a meeting place for high-ranking members of the British colonial society.

On the opposite of the square is the Sultan Abdul Samad Building currently the office of the Ministry of Information, Communication and Culture of Malaysia. To the South is the former National History Museum and Kuala Lumpur City Gallery - together they tell the story of Kuala Lumpur as a city.

To the North is the St. Mary's Anglican Cathedral, currently the Diocese of West Malaysia and the see of the Bishop of West Malaysia. A short distance from the square there is the original Kuala Lumpur Railway Station, a fairytale Moorish-style building completed in 1886 and still operational.

On the midnight of 31 August 1957, the Union Jack went down and the Malayan Flag was raised here for the first time. This is also why the square is called Independence Square. Every year, the Independence Day celebrations are held here.
Image Courtesy of Wikimedia and Azreey.