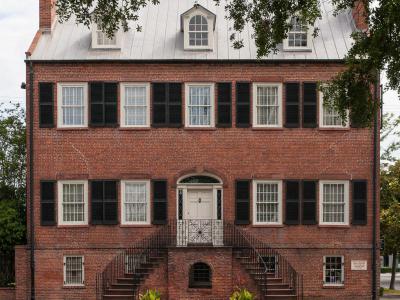 The Isaiah Davenport House, built in 1820 and threatened with demolition in 1955, is what encouraged concerned citizens of Savannah, Georgia, to recognize the architectural significance of the home and other historical buildings in the city and launch preservation efforts that eventually saved hundreds of structures.

Located on a corner of Columbia Square, the Federal-style building was built by Davenport for his wife, ten children and nine slaves. A century later, the once stately home in a fashionable neighborhood became a rundown and dilapidated rooming house in a seedy part of town. A group of community-spirited citizens gathered to purchase it – the first act of the newly organized Historic Savannah Foundation, which went on to save hundreds of buildings in the city; in fact, in 1955, Davenport House became the Foundation's headquarters. It was opened to the public as a house museum in 1963.

Since the mid-1990s, the museum began a restoration process which resulted in a more authentic experience for visitors, including period wallpaper and room furnishings reflecting the inventory taken at the time of Davenport's death in 1827.

Why You Should Visit:
Although not as opulent as some other houses one can visit in Savannah, the 40-min tour – which starts with a brief video, very well done – is quite appealing. Each room has been carefully renovated with attention given to the tiniest detail, and great pains have been taken to create even the original designs of the floor and the wallpaper.

Tip:
Enjoy the beauty of the garden after your tour but make sure to enjoy the gift shop as well, since profits go for the continual improvement of this beautiful home.