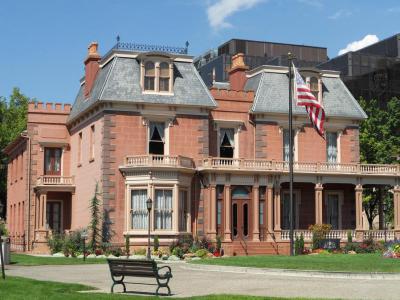 The first house to be built on a scale that could be described as a "mansion" in the Salt Lake Valley, Devereaux House is also among the best-known local examples of the Second Empire style, which was widely used for public architecture in France during the reign of Napoleon III. Most prominent in this respect is the mansard roof that forms the 3rd floor – an 1860s addition to the original Gothic cottage. Owned by William Jennings, the city's first millionaire, the mansion soon became a social center for the area, hosting the territory's most prestigious visitors, including presidents and generals, foreign dignitaries and celebrities of the time.

The Church of Jesus Christ of Latter-day Saints acquired the building in 2005 and maintains it as a historic site with occasional use for receptions and other events. Noted for the high quality of its woodwork and appointments, it has been preserved in the middle of the city without a perimeter fence, so the yard has the appearance of a park. It is surrounded by larger and newer structures including Vivint Smart Home Arena, the Triad Center, the Salt Lake City Union Pacific Depot and the surrounding The Gateway development.
Image Courtesy of Wikimedia and Mangoman88.

Want to visit this sight? Check out these Self-Guided Walking Tours in Salt Lake City. Alternatively, you can download the mobile app "GPSmyCity: Walks in 1K+ Cities" from iTunes App Store or Google Play. The app turns your mobile device to a personal tour guide and it works offline, so no data plan is needed when traveling abroad.