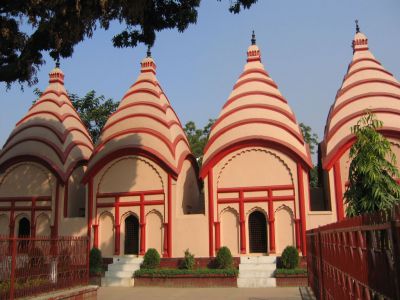 Dhakeshwari National Temple is a Hindu temple in Dhaka and is state-owned, giving it the distinction of Bangladesh's "National Temple". The name "Dhakeshwari" means "Goddess of Dhaka". Since the destruction of Ramna Kali Mandir in 1971 by the Pakistan Army during the Bangladesh Liberation War, the Dhakeshwari Temple has assumed status as the most important Hindu place of worship in Bangladesh.

Dhakeshwari Temple is a hub of socio-cultural as well as religious activity. Each year, the largest celebration of Durga Puja (the most important event in the Bengali Hindu calendar) in Dhaka is held at the National Temple, and a stream of dignitaries (such as the Bangladeshi President, Prime Minister, Leader of Opposition, Members of Parliament and media celebrities) come to felicitate the Bangladeshi Hindu community from the temple premises. Several thousand worshippers and onlookers (including Muslims) stream through the premises where they are offered prasad (food - usually rice and lentils). A Bijaya Sammelani (cultural program following Durga Puja) takes place in the adjoining parade ground a few days after Durga Puja is complete, and is also a major cultural event in the Dhaka calendar, regularly attracting some of the top performers from the Dhaka music and film industry.
Image by Ragib Hasan on Wikimedia under Creative Commons License.
Sight description based on wikipedia

This sight is featured in a self-guided walking tour of Dhaka, Bangladesh within the mobile app "GPSmyCity: Walks in 1K+ Cities" which can be downloaded from iTunes App Store or Google Play. Please download the app to your mobile phone or tablet for travel directions for visiting this sight. The app turns your mobile device to a personal tour guide and it works offline, so no data plan is needed when traveling abroad.