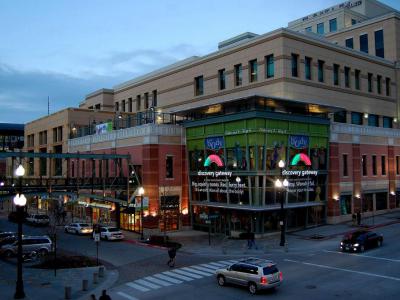 That year, it had become evident that TCMU had reached the physical limits imposed by its current building, and the decision was made to relocate and expand to better serve the community. In 2002, a bond issue was approved by Salt Lake County voters to fund the relocation of TCMU to a new, larger building in the Gateway District of Salt Lake City. Ground was broken on the new Museum on 22 September 2005. Less than one year later, on 16 September 2006, TCMU opened to the public at its current location and officially became Discovery Gateway.

Everything at Discovery Gateway is designed with kids in mind. The exhibits are all interactive and hands-on. Exhibits on the second floor of the museum include the Garden, where kids can play music together on a giant marimba. Just behind the Garden is Kid's Eye View, a kid-sized town where kids can shop, build structures, or feed the animals on the Utah Family Farm. The third floor of the museum features the Story Factory, where kids can put on a play, draw a comic strip, or make a stop-motion animated film. Also located on the third floor is the Studio, where the worlds of science, invention, and art meet.