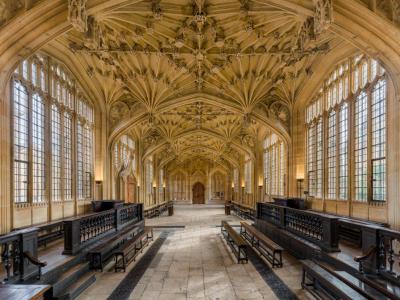 A true marvel of Medieval architecture, the Divinity School is famed for its intricate ceiling patterns and tall, airy windows. Attached to the Bodleian Library, it sits opposite the Sheldonian Theatre, which is used today by students when they matriculate and graduate.

Used in the filming of the first four Harry Potter movies, the place provided setting for the Hogwarts Hospital Wing. Fans of the earlier films will recognise it as being where Harry first wakes up at the end of The Philosopher’s Stone, after having had his first standoff with Voldemort.

Other scenes from the series include: The Prisoner of Azkaban – where Harry and Hermione use the time turner to save Sirius Black and Buckbeak; and The Goblet of Fire – where Professor McGonagall tries to teach Ron Weasley some dancing moves ahead of the festive Yule Ball.
Image by Photo by DAVID ILIFF. License: CC BY-SA 3.0 on Wikimedia under Creative Commons License.