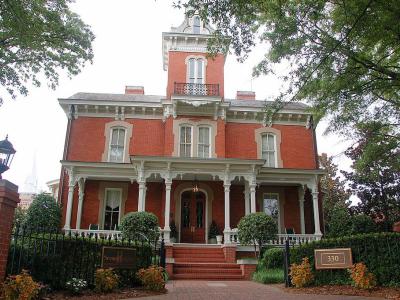 The Dodd-Hinsdale House was built in 1879 at 330 Hillsborough Street for Raleigh Mayor William H. Dodd. It is a brick house with, bracketed eaves, narrow segmented arch windows, porches, and carved millwork which are all characteristic of the Italianate style. The shallow gable roof is a likewise Italianate feature, but the tower with concave mansard roof and ornate dormers is distinctly Second Empire in style. Despite the mix of features, the house is classified as Italianate with an uncommon mansard roofed. The design is very similar to an 1875 wood house at 304 Oakwood Avenue which was constructed by the same builder. The structure is a surviving example of the luxurious and prestigious houses built in the late 19th century, many of which have since been replaced by modern commercial buildings.

In 1890 Dodd sold the house to John W. Hinsdale. The house was kept in the Hinsdale family until 1971. For a couple decades the fate of the house was uncertain despite its 1971 listing on the National Register of Historic Places as Raleigh Historic Property. At the end of the 1980s, the owners attempted to renovate the house but failed to complete it leaving the house vacant and partially gutted. In 1997, it was bought by a private company and turned into a restaurant named "Second Empire" giving recognition to its past and architectural design.
Image Courtesy of Flickr and Katrina Henderson.
Sight description based on Wikipedia.