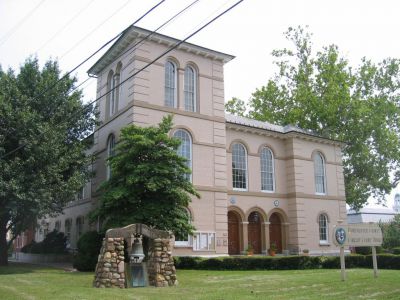 Dorchester County Courthouse and Jail is a historic courthouse building located at Cambridge, the county seat of Dorchester County. It is an Italianate influenced, painted brick structure, which was enlarged and extensively remodeled with Georgian Revival decorative detailing in the 1930s. The building entrance is flanked on the north by a three-story tower. It was constructed in 1853, and is the only courthouse designed by Richard Upjohn in Maryland.

The County Jail, which stood to the southeast of the courthouse from about 1882 until its demolition in 1994, was a Queen Anne and Romanesque Revival style granite structure with brick and terra cotta features. The jail was the work of the Baltimore architect, Charles L. Carson. It was listed on the National Register of Historic Places in 1982.
Image by Eli Pousson on Wikimedia under Creative Commons License.
Sight description based on wikipedia

Cambridge contains a variety of great churches, many of them are very old, dating back to the 17th and 18th centuries. Take the following tour to discover the rich heritage of Cambridge's churches.

Cambridge, Maryland is a quiet city situated along the Choptang River, one of the earliest English colonial settlements in the area. Centuries on, the city has retained much of its colonial atmosphere, carefully preserving the local heritage and traditions. To discover the city's main attractions, follow this orientation walk.