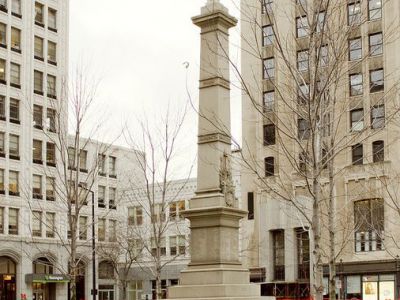 Downtown Youngstown is the traditional center of the city of Youngstown, Ohio, United States. After decades of precipitous decline, the downtown area shows signs of renewal. Civic leaders have expressed hope that the district will emerge as a significant arts and entertainment district within the Youngstown-Warren metropolitan area.

Downtown Youngstown is the site of most of the city's government buildings and banks. A number of entertainment venues are also located in the downtown, including the Covelli Centre, Powers Auditorium (the original Warner Bros. Theatre), the DeYor Performing Arts Center, Oakland Centers for the Performing Arts and The “Man on the Monument”. The “Man on the Monument” is a familiar landmark to those of us who live in the area. In addition, the downtown sits to the immediate south of notable cultural and educational resources, including Youngstown State University, the Butler Institute of American Art, and the McDonough Museum of Contemporary Art.
Image by Jack Pearce on Flickr under Creative Commons License.
Sight description based on wikipedia