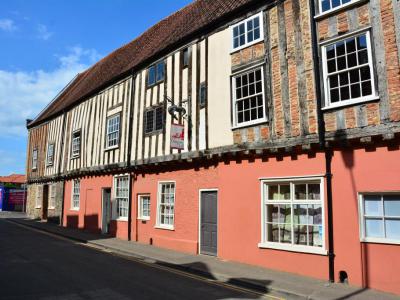 Dragon Hall is a Grade 1 listed medieval merchant's trading hall located in King Street, Norfolk close to the River Wensum. The Great Hall was built between 1427 and 1430, but some parts of the site, such as the undercroft, are older. Archaeological research has shown evidence of 1,000 years of human habitation on the site.

Dragon Hall was built by a merchant called Robert Toppes as the hub of his international trading empire. The Great Hall is the centre piece of the site with its magnificent crown post roof which contains an intricately carved dragon on one of the spandrels, which gives the building its name. This was where Toppes displayed goods from home and abroad to other English and European merchants. Dragon Hall is unique because it is the only known surviving building of its type built by one man for his own use rather than by a Guild. The building operated as a showroom and warehouse for about 30 years. Dragon Hall is managed by a small team of staff and relies on the support of a large body of volunteers. It operates as a heritage museum and is also a venue for all sorts of community, cultural,and learning activities such as weddings, parties, theatre and music, markets, school visits and workshops.
Image by Mn on Wikimedia under Creative Commons License.
Sight description based on wikipedia

Want to visit this sight? Check out these Self-Guided Walking Tours in Norwich. Alternatively, you can download the mobile app "GPSmyCity: Walks in 1K+ Cities" from iTunes App Store or Google Play. The app turns your mobile device to a personal tour guide and it works offline, so no data plan is needed when traveling abroad.

Norwich is a large, wonderful city in England with many fascinating points of interest. If you want to know more about English culture and history, be sure to check out the following tour of Norwich’s most impressive museums and art galleries.

Containing a wide assortment of churches and cathedrals, Norwich has much to be proud of when it comes to its religious heritage. Each one is beautifully decorated and has its own story to tell. Check out Norwich’s most fascinating religious edifices in the following tour.