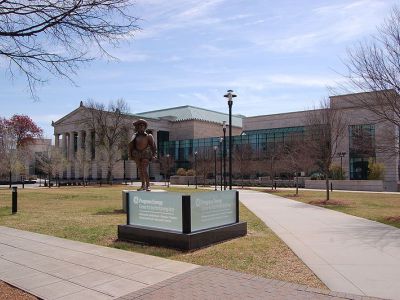 Duke Energy Center for the Performing Arts, Raleigh (must see)

Situated downtown at the southern end of Fayetteville Street, the Greek Revival structure is an architectural complement to the North Carolina State Capitol. Following minor improvements in 1963 and 1977, the auditorium was renovated extensively in 1990, with the notable addition of an external modern glass concourse and lobby. The venue seats 2,277 and most often hosts large musical theater productions.

Meymandi Concert Hall seats 1,700 in the classic shoebox configuration. It is the home of the North Carolina Symphony. Named for the mother of Raleigh physician and philanthropist Dr. Assad Meymandi, the facility has excellent acoustics. Fletcher Opera Theater seats 600. The theater is named in honor of Alfred Johnston Fletcher (1887-1979), a pioneer of television broadcasting in Raleigh. Seating 150, the Kennedy Theater offers a 40x60-foot black-box space for nontraditional performances and experimental theater. It is named for longtime Raleigh theater patron K.D. Kennedy Jr. and his wife Sara Lynn. Lichtin Plaza is the 2-acre lawn fronting the Progress Energy Center.The plaza is named for Harold Lichtin, a prominent regional commercial real estate developer.
Image Courtesy of Wikimedia and Jmturner.
Sight description based on Wikipedia.